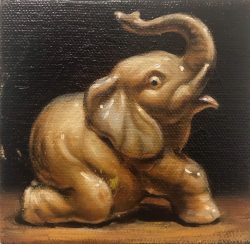 Angela’s work plays with images that have their roots in the disposable kitsch culture of her childhood – an era of knitted swimming costumes, doilies, figurines and plastic flowers. She takes various components from photographs and objects, removes them from their original cosy surroundings then merges and reforms them with a new emphasis on their peculiarities. Although the final paintings contain a large dose of mockery, the scale and the technique of Angela’s paintings celebrate and elevate a culture that has often been dismissed as inferior.

Angela comments, “My work explores ideas and subject matter often taboo in art, such as the sentimental, the cute and the nice. The painting style transforms and elevates the original throwaway kitsch image so it cannot be dismissed as merely a “bad painting”. The subject matter is simple, strong and “in your face”. These subverted cliches confront us with our ideas of what is considered “good” and “bad” taste and question our cultural standpoint – the gap between the art world and the creativity of everyone else – “My taste is better than yours”.”

Based at her studio in Spike Island, Angela has been working on a series of “Colossal Cat” paintings. This new body of work is a notable departure from her previous practice creating large-scale abstract paintings. 2011 has seen Angela expand this practice into looking at kitsch mantelpiece figurines, dolls and children.

Angela studied for a BA in Fine Art at Bristol Polytechnic then gained a scholarship for post-graduate study at Krakow Academy of Fine Art in Poland.

Angela has received recognition for her work including acceptance for The Threadneedle Prize Exhibition for painting and sculpture in 2010 and inclusion in the Royal Academy Summer Exhibition with Cowboy Joe from Mexico from the Colossal Cat series – one of the hits of the show. She was also interviewed by Claudia Winkleman for the BBC Radio 2 Arts Show earlier this year.