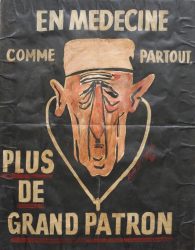 1968
Acrylic on paper on card
Signed ‘Ecole Beaux Arts 68’
Framed
81 x 68cm
£3000
biography
During the major strikes and student uprisings in France in 1968, the École des Beaux-Arts turned itself into a workshop for revolutionary messages.
Students began to strike over the rigidity and hierarchy of the French university system, defying the historical deference of young people to their elders; the same day, workers at a major factory near Nantes walked out.
Within days, the strikes spread to other universities and factories, and garbage collectors and office workers joined in. By mid-May, more than 10 million people across France were on strike, and the country had all but come to a standstill.
The protests of 1968 ushered in more than five years of social upheaval, intensifying an antiwar movement in Europe and contributing to the women’s liberation and gay rights movements. And it all started with a call to upend the old order.
The École des Beaux-Arts was at the center of the revolt. Many of the prestigious art school’s students and teachers occupied the 300-year-old stone structure on the Left Bank of the Seine: Rather than holding meetings only in the building’s vast rooms and courtyards, they turned the school into an atelier, or artists’ workshop, where they created protest art. The often arresting posters straddled the line between art and propaganda.
In keeping with the utopian ideals of collective work and anonymous authorship, the artists labored together to conceptualize, design and write slogans for the posters that framed their revolutionary sentiments.
The students printed hundreds or sometimes several thousand copies of the posters and taped them to lampposts and walls around Paris. In an era before the internet, the posters became a trusted way to communicate plans for action as well as the protesters’ political messages. There was little faith in electronic media at the time because it was state owned.
In response to the protests, Mr. de Gaulle was reported to have said: “Reform, yes. Havoc, no.” Until 1968, Mr. de Gaulle was primarily associated with the resistance in World War II, but in ’68 he tried to repress the strikes with armed police officers. His lack of sympathy for the strikers and his seeming inability to understand them made him the target of much of the protesters’ anger.