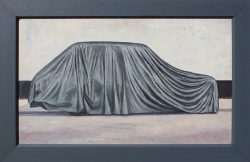 biography
Artist Clifford Hall was born in 1904 in Wandsworth, Clifford Hall spent his early years around Richmond Park, first in Sheen Avenue, then in Mount Arras Road. He attended Elm Tree House School, Richmond Hill School and later Kings College School, Wimbledon. From 1922 he studied at night at Richmond Art School, where Charles Wheeler then taught, and later attended Putney Art School fulltime under Stanley Anderson. From 1926 to 1928 he studied for two years at the Royal Academy Schools where he was influenced by Charles Sims and Walter Sickert (see Sickert: The Painter and His Circle by Marjorie Lilly, 1971). During his years of study, he obtained a number of portrait commissions which, together with the money from a Landseer Scholarship, helped pay for his studio-room at Twickenham. In 1928 he moved to Paris to join his friend Edwin John, son of the well-known painter Augustus John, where they lived together in a small suburban flat not far from Montparnasse. Clifford and Edwin used to draw in the Cours Libre at the Grande Chaumiere several times a week, and for some time he studied under Andre l’Hote in his studio near the Gare Montparnasse. Clifford Hall kept a journal in which he made records of the painters, women and cafes he was introduced to by Edwin in the Montparnasse ‘artist resorts’.

He returned to England in the early 1930s where he started to earn a living by painting on location in Isleworth, Soho and the Caledonian Market. His first one-man exhibition was held at Therese Lassore’s famous Beaux Arts Gallery in 1935, and following the war, he was represented by Cork Street’s Roland, Browse and Delbanco, for three major one-man exhibitions in 1946, 1947 and 1950. Other one-man exhibitions were held at the Anthony d’Offay Gallery and the Leicester Gallery from the early 1950s onwards.

Clifford Hall was recognised by critics and leading galleries in his lifetime but following his death his work became somewhat neglected. However, in recent years his reputation and work has regained great popularity and Apocalypse Press are looking to publish a monograph on the artist. Four years after his death a memorial retrospective was held at the Belgrave Gallery. Today, examples of Clifford Hall’s work can be seen in many collections, including the V&A Museum, the Imperial War Museum, the Arts Council, and Bradford City Gallery.