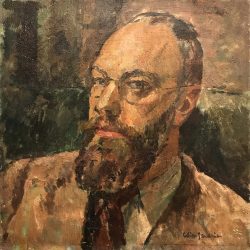 Thought to be the Hon Godfrey Samuel
Oil on board
Unframed, 46 x 45.5cm
sold


biography
A well-known poster designer, illustrator and muralist, Alfred Clive Gardiner was also a highly influential art teacher.
He trained at the Slade School of Fine Art (1909-12) and the Royal Academy Schools (1913-14). After the First World War he went on to teach at Brighton School of Art, Bolt Court Technical School (an antecedent of the London College of Communication), and in 1921 Goldsmiths College School of Art, where he began by teaching one day a week. By 1929 he was its principal a position he held until 1958.
He revolutionised Goldsmiths, by eschewing its academic roots and taking it into the 20th century, into the world of the impressionists, the Modern European Movement and self-expression.
Among others he taught Graham Sutherland, Bridget Riley, John Craxton, Lucien Freud, (with whom he came great friends at the time), and that most influential of designers, Mary Quant. Graham Sutherland, who was to become one of England’s leading artists declared that he owed everything to Gardiner and wrote of him to his son ‘How blind I was to resist for one moment the message of this real painter, this man of education, this master of integrity… there is no doubt at all that he was one of the very few responsible for the changing climate of art in England through the school and generally’.
When 16 he visited Paris, the then centre of the contemporary art world, where he became intoxicated by artists such as Cézanne.
He deisgned 27 posters for London Transport, one of the major poster commissioning bodies of the interwar years, and was also one Shell Petroleum’s leading poster artists and he also participated in the Modern Pictorial Advertising (1931) exhibition at the New Burlington Galleries, London. He also worked for the Empire Marketing Board (1926-33), who also commissioned many, many posters.
Gardiner painted a number of murals including Coal for the 1938 Glasgow Empire Exhibition, for the Student’s Union at the University of London, Sir John Benn’s Hostel, Stepney and Toynbee Hall in the East End, London.
He was also an associate member of the pioneering multidisciplinary Industrial Design Partnership (1935-40), whose founder members included Misha Black, Miner Gray and Walter Landor.
He had exhibitions at The French Gallery, Berkeley Square (1963) and the South London Art Gallery, Camberwell, (1965) and, after his death in 1960 at the age if 69, a memorial exhibition was held by the Arts Council in the same gallery in South London, near to Goldsmith’s College. In 2001 an exhibition was put on at Charleston House (the epicentre of the Bloomsbury Set) by the art historian, Norbert Lynton and Stephen Gardiner, featuring his work in the Scilly Isles.