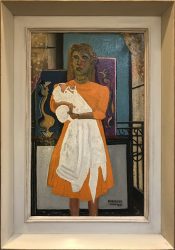 Originally from Ely in Cambridgeshire, Rogers did not start painting full-time until 1937, initially as a painter of portraits and landscapes. However it was the International Surrealist Exhibition of the year before in 1936 that would have the most lasting influence on the style that he would develop in the next two decades. In the 1960s his work embraced abstraction and he executed colourful and attractive geometric abstract oils and cut-metal reliefs. He also worked as a sculptor. He showed at the Belgrave Gallery and the Drian Gallery in London, and had a retrospective at the Victoria Art Gallery in Brighton in 1968.