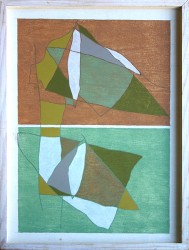 George Dannatt’s orderly geometric arrangements aligned him with constructivist artists such as Ben Nicholson and Naum Gabo, his closest artistic relationship being with the artist John Wells who spent time with these artists in Cornwall from 1936. Born in Blackheath, London, he qualified as a chartered surveyor in 1940 and joined the family business with a brief spell from 1940 – 1944 as a conscript in the Army. During his time as a chartered surveyor he was also very involved in music, being a freelance music critic until 1956.
From 1948 he started visiting the South West of England, initially mainly Dorset and Wiltshire and began what was to become a long relationship with the area. In 1963 George Dannatt started visiting Cornwall and associating with painters there and beginning to paint seriously. Between 1970 and 1983 he showed work regularly at the St. Ives Penwith Gallery, from 1973 also showing works at the Newlyn Art Gallery and becoming a member of Newlyn Society of Artists.
His constructions from 1974 demonstrate his technical versatility and the precision and balance in his paintings is testament to the constructivist legacy, something which George Dannatt comments on in an interview with Brandon Taylor in 2000 in which he notes the almost intuitive mathematical relationships which emerge in his works. Artist George Dannatt has exhibited in many one man and group exhibitions over the years. In 1975 he had the first three man show with John Wells and Alexander MacKenzie at the Orian Gallery Penzance, later in 1982 he had a Retrospective exhibition at the Newlyn Art Gallery.