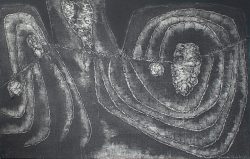 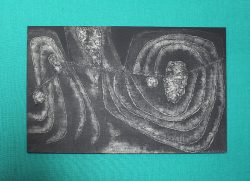 biography
James Guitet belongs to the second generation of lyrical abstraction whose works became prominent in Paris from 1955. After beginnings marked by geometrical abstraction, his work quickly moved towards a search for material effects, starting from a technique relying on casein which drew him to ligneous textures whose thickness contrasted with planes of colour. These two characteristics of his plastic vocabulary appear in his extremely structured, austere compositions. Abstract “landscape”, his painting approaches nature by capturing its energies. The 1970s open a period of theoretical analyses and plastic research during which he experimented with new formats and questioned the traditional function of the stretcher, a constitutive and structural element of painting. Through printmaking, Guitet was also interested in the book and began to create his livres blancs, which were hollowed and sculpted, in which his fascination for volume and architecture can be found. Indeed, as soon as it was founded in 1965 by Michel Ragon, he joined the GIAP (Groupe International d’Architecture Prospective). He developed a plan for a biological habitation under a cupola, and a coastal urban plan while continuing to paint and exhibit. From 1979, he continued his expression as a painter and engraver, and his work moved towards noticeable simplicity. He also created a series of paintings on the subject of the fold or Pli as a tribute to Deleuze and the history of painting. The Pli there became the dynamic rhythm of a space without end, the generator of “derivative forces”, of swirls, shadows and light.

Both a painter and engraver, James Guitet was born in 1925 at Nantes where he studied at the École des Beaux-Arts from 1942 to 1947 and then at the Académie Jaudon in Paris. He participated in the Salon des Réalités Nouvelles from 1953. In 1954, he exhibited at the Galerie Arnaud in Paris for the first time. Numerous exhibitions followed in that gallery, then in Nantes, Rennes, Tourcoing for example, but also in Canada in several European countries. Many of his works were acquired by museums in France and abroad. He won the David Bright prize for printmaking at the 1962 Venice Biennale and the Printmaking Prize at the Ljubliana Biennale of 1965. James Guitet also taught fashion draughtsmanship and the history of dress at the Angers École des Beaux-Arts and drawing at Versailles and at the Sorbonne.