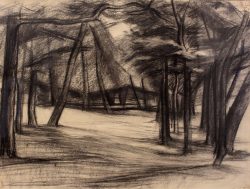 James Stroudley worked through a series of influences – from early Italian artists to Cubists – in order to achieve the incisive draughtsmanship that underpins his artistry. He then produced figure subjects, landscapes, still life compositions and, ultimately, abstracts with equal confidence and success.
James Stroudley was born in London on 17 June 1906, the son of James Stroudley, showcard and ticket writer. He studied at Clapham School of Art (1923-27) and then at the Royal College of Art (1927-30), where his teachers included Alan Gwynne-Jones and William Rothenstein. As a recipient of the first Abbey Scholarship he was able to spend three years in Italy from 1930, where he absorbed the influences of Giotto and Piero della Francesca, and produced one of the last wholly satisfying decorative cycles by a Rome Scholar of the period. From 1934, he exhibited at the Royal Society of British Artists, and was elected to its membership in the following year.
From the Second World War – in which he worked with the Camouflage Unit – Stroudley taught at St Martin’s School of Art and was a visiting lecturer at the Royal Academy Schools. Though he continued to live in London, his later work, exhibited at the Royal Academy from 1955, indicated regular painting trips to Kent and Sussex coasts. However, much of his later work was abstract. In 1971, his former student, Peter Coker, paid homage to Stroudley by including his work in the exhibition ‘Pupil & Masters’, held at Westgate House, Long Melford, Suffolk.
Stroudley married three times, and his wives included the fashion artist to the Sun newspaper, designer and writer, Phyllis Neuland, with whom he had one son; and the painter and printmaker, Gillian Thain, with whom he had two sons and one daughter.
Stroudley died in Wandsworth, London, in May 1985.