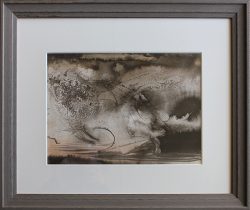 JOHN TUNNARD 1900–1971
John Tunnard initially trained in design at the Royal College of Art and worked for four years as a textile designer in Manchester before leaving the industry to concentrate on painting. He supported himself by teaching part-time at the Central School of Arts and Crafts in London. His first mixed exhibition was at the Royal Academy in 1931 and the first one-man show was held at the Redfern Gallery in 1933.

Tunnard exhibited regularly in London, primarily with the London Group, until the 1950s. A number of works exhibited during this period related to the landscape of Cornwall where the artist and his wife had settled. He never formally joined the Surrealist Movement but participated in their exhibitions in the 1930s, including Surrealism 1939 at Gordon Fraser Gallery. This exhibition featured Ernst, Klee, Magritte and Miro and led to Peggy Guggenheim giving him a show at her gallery, Guggenheim Jeune in 1939.

Numerous exhibitions followed, notably at the Redfern gallery, Zwemmer and Alex Reid and Le Fevre in London. His work was included in British Council exhibitions in Australia and South America.