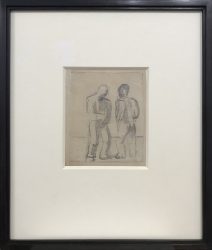 c1940
K.V. studio stamp verso
Pencil on thin war-rationed paper
Authenticated and dated by Gerard Hastings
Provenance: Collection of Peter Adam
10.3 x 12.5cm
£750
biography
Keith Vaughan was born in 1912, at Selsey Bill in Sussex, and attended Christ’s Hospital, where he was badly bullied. He received no formal instruction in art, but was apprenticed at the Lintas advertising agency, which gave him some understanding of form and composition. During this period he painted small artworks, leaving Lintas in 1939 to paint full time, a career that was interrupted by the outbreak of WWII. Vaughan registered as a Conscientious Objector, eventually ending up as an assistant and interpreter at a German POW camp.

After the war, he returned to painting, and took up a part time role teaching illustration at Camberwell School of Art. Also around this period he started illustrating for The Hogarth Press, John Lehmann, and Paul Elek, amongst others. He painted frequently; dream-like landscapes populated by tense, lithe figures. The curves and angles of their bodies are exaggerated, taking inspiration from the ballet, which Vaughan greatly admired. He corresponded with Graham Sutherland, and this influence can be seen in Vaughan’s treatment of line and colour. Vaughan’s subject was frequently a disguised way of treating his own sexuality, the body mirrored in the land; as Ian Massey has written: “landscape acted as a metaphor both for the physical body and its absence”.

In the 1950s, Vaughan painted several works that used the medium of myth to convey personal feelings and experiences, for example ‘Theseus and the Minotaure’ (1950), which was shown as part of the Festival of Britain, for the Arts Council’s Sixty Paintings for ‘51. The ’50s also saw Vaughan exhibit frequently in London, at The Lefebvre Gallery (1950, 1951), The Redfern Gallery (1952), and The Leicester Galleries (from 1953). He also showed in New York, at Duralcher Bros (from 1952). He was included in Patrick Heron’s Space in Colour in 1953, and begun to be bought by institutions such as the Tate. From the mid ‘50s he made visits to St Ives with Patrick Procktor and Bryan Robertson, travelling to see Patrick Heron and producing paintings of the Cornish countryside.

In 1958, Vaughan stopped using the many drawings that he had previously prepared before making a painting, and produced the Lazarus series, working from life and freeing his line. Also in this year he took up a six-month residency at Iowa State University. America excited and inspired him, and he finished his residency with a trip to Mexico. He was diagnosed with depression in 1958, an illness that was to dog the rest of his life.

Returning to England and to painting, Vaughan produced an extensive body of work, including large, gestural charcoal drawings in 1960. In 1962, Bryan Robertson, who had long been a supporter of Vaughan’s, mounted a large retrospective at the Whitechapel Gallery. Vaughan also bought three derelict cottages at Toppesfield in Essex and visited regularly; Ramsay McClure lived there much of the time. Nine of the landscapes that he produced in Essex were shown at Marlborough Fine Art in 1968.

Vaughan was aligned with an English Neo-Romanticism but sought to move away from this, into an exploration of European Modernism. His paintings show the influence of movements such as Cubism, or artists like Cezanne and Picasso. For him, his desire and libido were at the centre of his work, and alongside his long-term partner Ramsay McClure, Vaughan had many other liaisons. However, Vaughan often felt stifled, and this, combined with self-doubt and an alcohol and drug habit, made his life hard and sometimes unbearable. On 4th November 1977, Vaughan committed suicide.