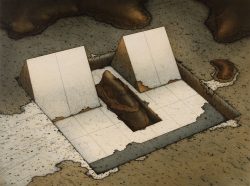 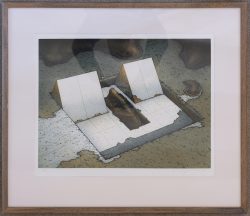 Kunito Nagaoka, printmaker, painter, and educator, was born in Nagano Prefecture, Japan in 1940. He worked as a graphic designer in Tokyo for three years before moving to Berlin in 1966. He studied in the Print Department in graphic, print, and advertising at the State Academy, and later in the Print and Painting Department of State Academy of Fine Arts. Her earned his Masters degree under Professor Gerhard Bergmann in 1976. It should be noted that he studied etching with Louis Kohnke-Duwell.
He was Guest Professor at the Icelandic College of Arts and Crafts, Reykjavik, Iceland in 1984 and 1985; Guest Professor of Grafikaan Paja, at Jyvaskyla, Finland in 1986; Guest Professor at the International Summer Academy of Fine Arts in Salzburg, Austria in 1987, 1990 and 1993; and Guest Professor at the International Summer Academy in Gera, Austria each year from 1995 to 2008.
Nagaoka spent more than twenty years in Germany before returning to Japan where he was a Professor at the Kyoto Seika University, Kyoto, Japan from 1991 until his retirement in 2012.
His work has been honored with numerous awards, including the Grand Prize at the Bulgarian International Graphic Biennial, in Varna in 1985, and was included in many solo and group exhibitions. Collections holding his work include the Achenbach Foundation for Graphic Arts, San Francisco; the Albertina, Vienna; Berlin Gallery; Cincinnati Art Museum; deCordova Museum in Lincoln, Massachusetts; Israeli Museum of Art in Jerusalem; Museo de Arte Contemporaneo de Ibiza, Spain; National Museum Krakow; National Museum of Modern Art, Kyoto; Portland Art Museum; and the Victoria and Albert Museum.