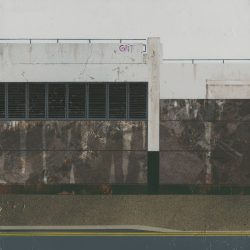 ‘My work is inspired by urban landscape, issues of gentrification, inequality, social housing and the flux of city environments. I am interested in Brutalist architecture, notions of utopia/ dystopia and finding beauty in the ordinary/ overlooked.

Between 2012 and 2017, my work focussed on Park Hill, the Grade II* listed Sheffield council estate and one of Britain’s largest examples of Brutalist architecture. The site is currently undergoing regeneration, with much of the estate converted into luxury flats, the remaining left boarded up and derelict.

It was the un-refurbished parts of Park Hill that I found most inspiring, where the memories and layers of the past were almost tangible. I wanted to document the estate in transition and also for the work to speak of the loss and displacement of the existing communities. Since 2017, as the regeneration of the estate has progressed, public access to Park Hill has been increasingly limited. I have thus been exploring similar locations undergoing gentrification in London, Manchester, Salford and Liverpool to inspire new work. In 2019, I received an Arts Council Grant to investigate the North East of England to make new paintings and prints for a solo exhibition that I had at Huddersfield Art Gallery. However, during lockdown, in 2021, unable to travel far, I have recently started to made new work again of Park Hill, documenting both the new build and a;so referring back to old photographs taken several years ago before regeneration got seriously underway.

Materiality, surface textures and facture are important concerns to me and for my paintings, I wanted to work with materials that have a physical connection to the sites I depict, namely concrete and spray paint (referencing the graffiti). I have cast concrete into small canvases to work on directly, employing spray paints and micro masking tapes to build up flat zones of colour and then oil painting for fine detail finishing. More recently, I have been working on large and lighter, custom made glass fibre reinforced panels to increase the scale of my work and also marble, referencing the perceived inequalities of rival building materials.’