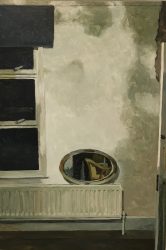 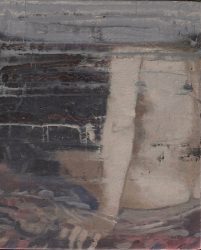 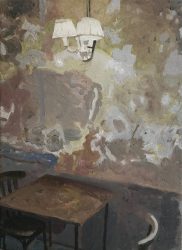 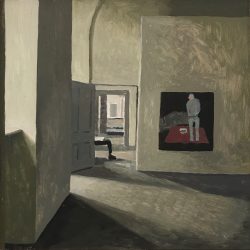 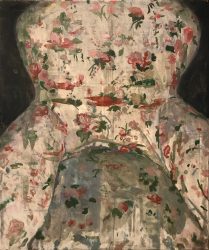 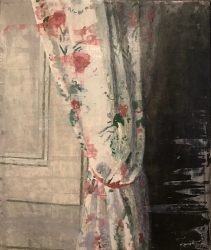 Mark Entwisle was born in Amman, Jordan in 1961, where his father was stationed and flew jet planes for the Royal Airforce. Moving back to England at the age of 6, he was sent to boarding school, where art was encouraged and appreciated – he felt art was always the thing that defined him. ‘I would draw like other people would read (years later I found I was dyslexic!)’
In 1980 he enrolled in a foundation course at CCAT Cambridge, where he specialised in printmaking, and then went on to do a degree in illustration at Brighton.
Mark graduated in 1984 where his first commissions included Penguin book covers (Gabriel Garcia Marquez, Aldous Huxley and P.G. Wodehouse), theatre posters for the National Theatre and record covers. Alongside working as an illustrator for 15 years, he was also painting and began showing at Beaux Arts, Bath and Long and Ryle, London. Then in 1999 he had his first portrait accepted into the BP Portrait Award at the National Portrait Gallery. Another was accepted the following year, with a commendation in 2002. This lead to Mark’s first portrait commission, and he has since worked primarily as a portrait painter. He has exhibited at the RA Summer Show, Hunting Art Prize, Nat West Art Prize, Laing Art Prize, Royal Society of Watercolours, The discerning Eye, The Threadneedle Prize and The Lynn Painters and Stainers Prize.
Mark Entwisle also teaches part time at the National Portrait Gallery.