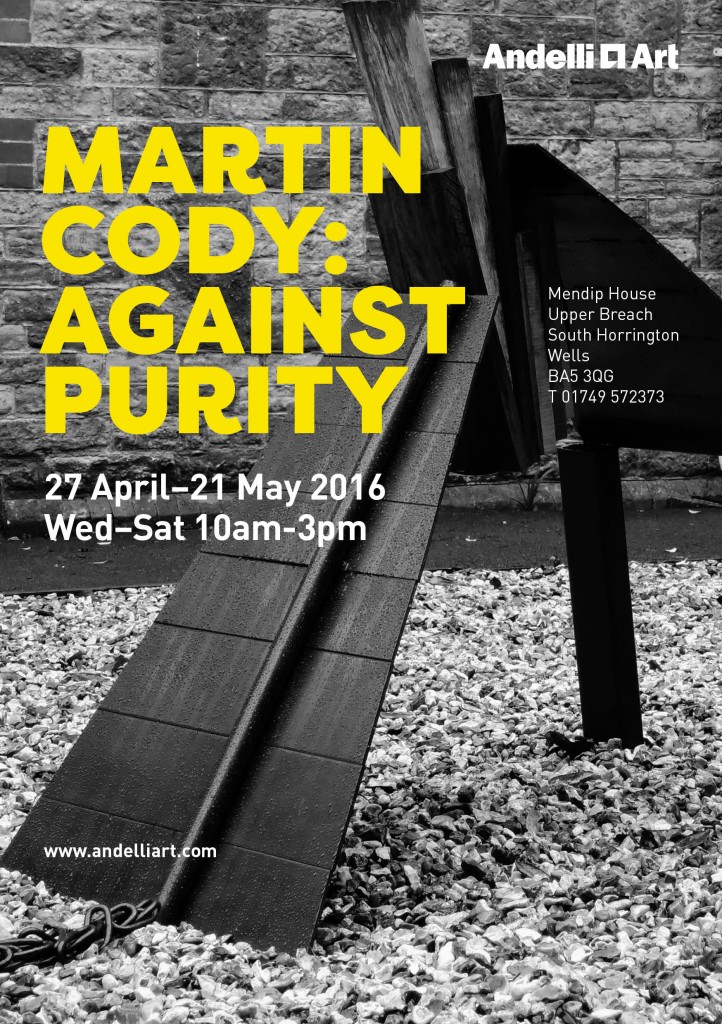 ‘Against Purity’ is Martin Cody’s inaugural exhibition as a sculptor practicing in Wells.

The sculpture in the grounds of Andelli Art are a mix of one recreated piece from the 1970s and new work. The graphic works in the Gallery, were made between 1993 and 2016.

“The Against Purity show deals in the boundary between sculpture as an activity of intuitive imagination and an activity that has to deal with real physical forces; a sort of pretend procedure which draws on elements of architecture combined with building site construction plus theatre set design. ‘Pretence’ in this context is the use of semi-improvised fabrication in the service of imaginative goals. The use of heavy materials requires some real engineering technique, particularly as I increasingly like to introduce a dynamic of ‘ramshackle’ and instability into the work.”

BIOGRAPHY
Prompted by The Beatles’ music and the ‘underground’ arts scene of the Arts Laboratory ‘movement’ of the late 1960’s, Martin Cody organised and participated in several ‘alternative’ music and performance events at this time in his home area of Norwich and Gt. Yarmouth. Later, he went to art school in Hull, initially to make films but studied sculpture at Liverpool Polytechnic College of Art and gained an Honours degree in Fine Art (Sculpture) in 1979. He was awarded the John Moores Fellowship in Sculpture for the following academic year. This award enabled him to travel to galleries in Paris and Amsterdam and subsequently make use of the studio facilities back in the Sculpture Department to make work for an exhibition in 1980.
After his Fellowship year, he returned to Amsterdam to follow up his interest in etching, returning after several months to live in London. There he worked as a set and prop maker for the Youth Theatre at the Young Vic in Waterloo.
Martin Cody qualified as Art Therapist in 1984, spending many years working in Adult Psychiatric services of the NHS in London and Birmingham.
He moved to Wells in 2011, and in 2014 resumed his practice as a sculptor.