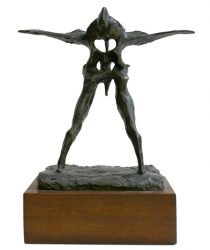 Artist Michael Ayrton was an important and leading figure in British art over three decades from the mid 1940s until his early death in 1975. Son of Gerald Gould the poet, he was a painter and sculptor, illustrator, stage and costume designer, and also worked as a writer, critic and broadcaster. A prodigious talent, he was commissioned at the age of 18 to design the production of John Gielgud’s Macbeth in 1942. From then on his work was exhibited at major London galleries, and he is represented in most British museums, with 20 works in the Tate Gallery collection, and also at MOMA, New York.

He began to sculpt in bronze in the early 1950’s, receiving some advice from Henry Moore and visited Cumae in 1956-7 and Greece in 1958, turning to Greek myth as his principal source of inspiration particularly the legends of Daedelus and Icarus, the Minotaur and the image of the maze. His powerful style sought to reinterpret mythological ideas in terms of the figure.

Michael Ayrton had retrospective exhibitions at Wakefield 1949 and the Whitechapel Art Gallery 1955. He lived most of his life in Toppesfield, Essex, and died in November 1975.