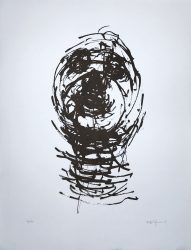 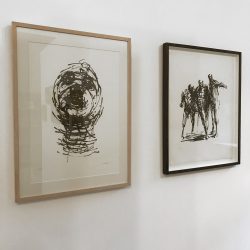 Oliffe Richmond was born on 8 November 1919 in Hobart, Australia.

After studying art and applied art at Hobart Technical College, and gaining a diploma in 1940, he worked for Amos Vimpany, Hobart’s most prominent stonemason, in whose workshop he learned much about materials, tools and methods of carving. At ballet classes and wrestling matches he observed the stresses and tensions of human bodies in exertion. Henceforth physicality informed all his work.

From 1945 he studied sculpture with Lyndon Dadswell at East Sydney Technical College and in 1948 won a scholarship and moved to England. He intermittently assisted Henry Moore until 1956, when he became lecturer at the Chelsea School of Art.

Richmond meditated for long periods among the megaliths of Stonehenge and was sustained by the sense of being part of a great and ancient tradition. Survived by his wife, he died of myocardial infarction on 26 February 1977 in his home at Kensington and was cremated. His work is held by major galleries in Britain, the Netherlands and Australia.