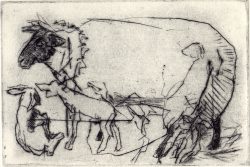 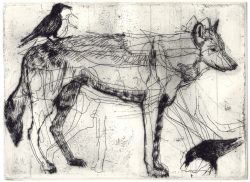 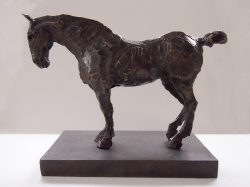 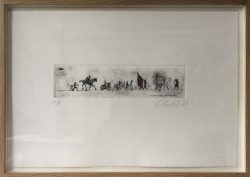 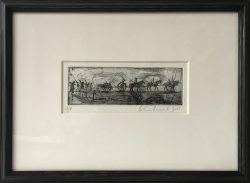 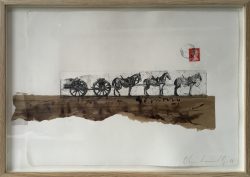 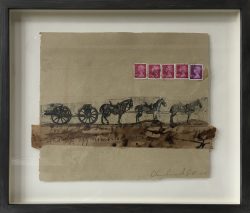 biography
OLIVIA LOMENECH GILL (b 1974)
For someone who was probably always going to end up an artist, Olivia’s career has followed a somewhat circuitous route. Attending a specialist music school (Wells cathedral) when she was young, Olivia discovered a passion for drawing and, after being offered both music and art scholarships at sixth form she had the opportunity to pursue this more extensively, along with music, theatre and set-design. Choosing to train in theatre, Olivia gained a 1st class degree from Hull University in 1996, during which time she also held her first solo exhibition, the success of which helped finance her studies. After several years working with various theatre companies in London and many other jobs besides, Olivia came to enroll on an MA in Printmaking, which she completed at Camberwell College of Art in 2001. By now she had begun exhibiting regularly in the National Print Exhibition, where she won several awards.

A move to Northumberland in 2001 meant devising new ways of working, with no printing facilities available; the adaptation and employment of different techniques in varying combinations is perhaps a trademark of Olivia’s work. During the next several years, Olivia exhibited at most of the major London Art Fairs and with Duncan Campbell Fine Art in Kensington.

After a chance encounter with the writer Michael Morpurgo in 2009, Olivia came to do her first illustration commission, ‘Where My Wellies Take Me…’ a story and anthology of poetry including Rosetti, Ted Hughes, and Norman MacCaig, written and compiled by Michael and Clare Morpurgo. Published in 2012, it was shortlisted for the Kate Greenaway Medal.

Olivia has since completed various other illustration commissions including Michael Morpurgo’s ‘War Horse; Only Remembered’, for which she worked on site with The Kings Troops RHA; several independent Scottish publishers, including Kathleen Jamie’s anthology ‘The Bonniest Companie’, recipient of the Saltire 2016 Book of the Year Award; Francesca Simon’s ‘The Monstrous Child’ and most recently, JK Rowling’s ‘Fantastic Beasts & Where To Find Them’ for Bloomsbury Publishing. Olivia has recently completed another story book for Michael Morpurgo and Walker Books which is inspired by the life and work of Dame Elisabeth Frink, publication in June 2019.

In 2004 Olivia embarked on building a studio, with the help of her husband, Vincent and a carefully compiled wedding list consisting of nails and locally grown larch. It took two years to build and she has worked in there ever since, in the foothills of the Cheviots. Nowadays, Olivia also has two Rochat presses housed in a dedicated workshop which she shares with Vincent, a paper conservator and picture framer, in the village of Belford, Northumberland.