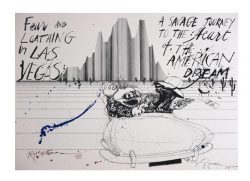 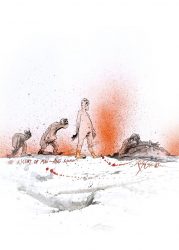 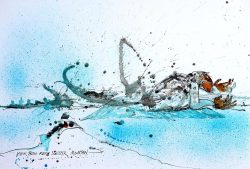 ‘Fear and loathing’
From Hunter Thompson’s cult classic, Fear and Loathing in Las Vegas, one of the most iconic images in the novel is Savage Journey. Ralph has collaborated with Brian Chambers to create this extraordinary, limited edition, screen print. Hand signed and numbered in red ink and embellished with his trademark flourish, the splat, in Ultramarine Blue, unique piece. They are produced by Kentucky based, Master Printer, Joe Petro III who has collaborated for decades with Ralph on his screen prints including the Hunter Memorial print, Vintage Dr Gonzo, The Sherriff and most recently, Leaving Kinshasa.

‘View from rough sleeper mountain’
A stunning 14 colour screen print on Somerset Satin, white 410 gsm paper
Every one of the 25 prints has unique hand finished elements by the Artist in addition to the signature.

PROVENANCE
Hand gifted from Ralph Steadman to the current owner

biography
Ralph Steadman is a British artist and cartoonist whose style is defined by energetic ink splatters and grotesque, natty figures, known for his collaboration with American author and journalist Hunter S. Thompson. Steadman works with pen and brush in ink, also using acrylic and oil paint, etching, silk screen, and collage. Distinctive visual language along with his political and social caricatures, cartoons and picture books made Steadman one of the most popular artists of the 20th century.

Born in 1936 in Wallesey, Liverpool, Ralph Steadman was educated at Abergele Grammar School, but left in 1952, at the age of sixteen, unable to bear the strict authority of the headmaster. One of Ralph’s first jobs was at the De Havilland Aircraft Company Chester in Broughton, Cheshire, where he worked as an Apprentice Aircraft Engineer. The factory life simply wasn’t something that Steadman could settle to. His cousin then found him a job at the Woolworths in Colwyn Bay where he was stocking shelves for about six months before ending up as tee-boy at McConnells Advertising. From 1954 to 1956 Steadman was serving in the Royal Air Force. It was here that he learned technical drawing, took a correspondence drawing course, and made many efforts to sell his works to newspapers.

Ralph Steadman is best known for his long-term partnership with an American journalist and author Hunter S. Thompson, with whom he first collaborated during a trip to the Kentucky Derby in 1969. The art is a lone business, and these collaborations, most notably with Thompson, were an attempt to alleviate that loneliness. The duo worked so well together because Steadman’s drawing added a significant value to Thompson’s writing. There were some things the writer was trying to say that couldn’t be done in any other way but through pictures. ‘’You can say much more, so much more subtly or more interestingly. Because you try to explain something in words and it just doesn’t work, you can’t quite put into words some of the weird things that you might possibly think of. You let things happen in pictures.’’ The two men formed one of the most acclaimed artistic collaborations of the 20th century. From this first encounter between them, Gonzo journalism was born. Gonzo journalism is a style of journalism that is written without claims of objectivity, a form of highly personal reportage, often including the reporter as part of the story via a first-person narrative.

In 1972, Steadman illustrated Thompson’s best-known work, Fear and Loathing in Las Vegas, a story based on Thompson’s drug-induced experiences traveling across America to Las Vegas with his attorney in the 1960s, which became a contemporary classic. Steadman’s illustrations and imagery were adapted for a 1998 film of the same name, starring Johnny Depp. Ralph and Hunter’s four decade long friendship also included collaborations on The Curse of Lono, coverage of the Watergate Scandals and countless articles in Rolling Stone magazine for which Steadman still holds the position of Gardening Correspondent.

Aside from Fear and Loathing in Las Vegas, Steadman has illustrated many books, including the fiftieth-anniversary edition of George Orwell’s Animal Farm, editions of Alice in Wonderland, Treasure Island, the English translation of Flann O’Brien’s Gaelic-language classic The Poor Mouth, and Fahrenheit 451. Steadman has worked with writers such as Ted Hughes, Adrian Mitchell, and Brian Patten. In 1978 he collaborated with his friend, Bernard Stone, with whom he created the classic children’s books Emergency Mouse in 1978, Inspector Mouse in 1980, and last part, Quasimodo Mouse in 1985. His books Fly Away Peter and The Big Red Squirrel and the Little Rhinoceros have recently been reprinted by Pavilion books. Ralph Steadman is the author of many books, including Sigmund Freud (1979), I, Leonardo (1983), The Grapes of Ralph: Wine According to Ralph Steadman (1992), a book about strange world of wine and winemaking, for which he won a Glenfiddich Food & Drink Award, and Still Life with Bottle: Whiskey According to Ralph Steadman (1997), among others. The book Extinct Birds, created in collaboration with Ceri Levy, was published in 2012, and in 2015, again collaborating with Levy, Steadman published Nextinction, where his focus was not on the birds that are gone, but rather on the ones that could yet be saved. The masterpiece included 192 critically endangered birds on the IUCN Red List, featuring the Sumatran Ground-cuckoo, Giant Ibis, Spoon-billed Sandpiper, Kakapo, and much more.