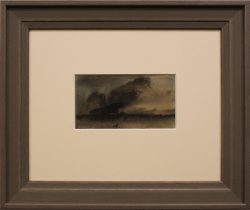 Richard Principal Leitch 1827-1882
The son of the painter and drawing-master, William Leighton Leitch (1804–1883). Richard P. Leitch was a landscape painter, an excellent water-colour painter and a good draughtsman on wood’ (MacGeorge, 112), he exhibited between 1844 and 1860 at the Royal Academy as R. Leitch Junior, at first from his father’s address. His View on the River Limpopo with a Herd of Hippopotami (reproduced in the Illustrated London News of 5 January 1856) was among scenes painted for Gordon Cumming’s South African Entertainment at 232 Piccadilly, London, in 1856. He also signed an engraving based on one of Charles Wirgman’s watercolour sketches of China in the Illustrated London News (1857–8).

In September 1857 he was in Normandy painting watercolours for Queen Victoria. Thereafter, especially when his father was ill, he painted extensively for the queen and gave lessons to her children; the styles of father and son are often confused. William Leitch stated that both Richard and a younger son, William, were ‘most graciously set a-going’ by the queen (letter of 28 Nov 1882; private information).

Richard Leitch published drawing manuals in the 1870s and early 1880s and worked as an illustrator for journals such as The Quiver and Good Words. His wife died a few months before him in 1882, leaving two children.