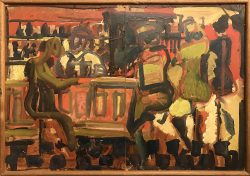 Born in Sweden, Sigfrid Grimma is known mostly for his still life and figurative works.
Grimma studied under Lennart Rodhe and Pierre Olofsson at Académie Libre in Paris (1950-1953) and Olle Nyman at the Art Academy in Stockholm (1954-1959). He followed this by study trips to Italy and Spain. Not widely exhibited but has instead chosen to show from his studio in Huddinge, Sweden.
His public works include a decoration for Huddinge health center.
Sigfrid Grimma has been awarded a residence scholarship at San Michele, Stockholm’s cultural scholarship and Axelsson-Johnsson’s fund. Alongside being a painter, he ran Sigfrid Grimmas Art School in Huddinge.
Grimma is represented at the Modern Museum and Västerås Art Museum.