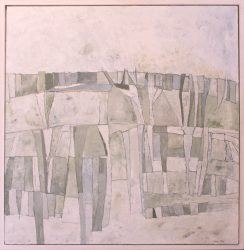 biography
In 2005 Simon Beer moved to Burrell, North Yorkshire and lived/painted in a tumbled down cottage for a year before moving to Knaresborough. After taking on a large studio in Ripley and worked there for several years, he went back to University (Leeds Met) and studied for a degree in Contemporary Design followed by a Masters in Fine Art at York St John.

‘My painting, which has always been hugely influenced by landscape, changed as I swapped the vast open landscapes of Norfolk and The Fens, for the more dramatic landscapes of the north. I have continued with my interest in mathematical patterns and arrangement.’