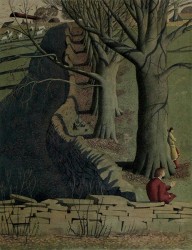 Click images to enlarge
For images of the works framed, please email us at ask@andelliart.com

Simon Palmer was born in Yorkshire in 1956 and was brought up in Bromley where his family moved when he was eight months old. He graduated from Reigate Art School in 1977. In the Easter of 1976 he travelled from the south of England with friends to spend a few days in Lastingham, North Yorkshire. It was then that he fell in love with the landscape that has been his inspiration ever since. For the past 40 years he has lived and worked in Wensleydale, North Yorkshire.

Over the last four decades Simon Palmer has become one of Britain’s leading watercolour artists. Like other British artists before him he draws a spiritual connection from the land in a specific place. Anyone visiting Wensleydale will immediately recognise Palmer country: the narrow lanes, railway bridges, the drystone walls and winding fencing, stone churches and farms, ancient trees and new saplings and, on the horizon, the distant moors waiting to claim back this now domesticated land.

His connection with his much loved home and the world of his imagination unfettered by current trends and opinions has let him see what others do not. In this sense he is a visionary painter. From the apparently familiar he has created an illusion which hovers on the brink of reality.

Simon has exhibited extensively since 1980 and held ten one-man exhibitions in London with JHW Fine Art. Since 2015 he has exhibited bi-annually with the Portland gallery in conjunction with JHW Fine Art. Other notable exhibitions include in 2004 a retrospective show Territories of the Imagination held at the Mercer Art Gallery, Harrogate and he later curated Palmer’s Choice at the same venue. On a number of occasions his work has been selected for display at the Royal Academy Summer Exhibition where he won the 2007 Turner/Winsor and Newton Watercolour Award. Other notable exhibitions include the National Trust Centenary exhibition, British Landscape Painting in the Twentieth Century.

He has also exhibited at Crane Kalman Gallery, Dreamers of Landscape at Bohun Gallery, Art and Yorkshire: Turner to Hockney at the Mercer Art Gallery and the Glyndebourne Festival Opera exhibition. He is an Honorary Member of the Royal Institute of Painters in Watercolours.